A few years back now, (five to be precise), a good friend of mine told me about a site where he had heard 2 inch mortar fins had been spotted in a field. Now I am normally very sceptical about this kind ‘report’ as all too often, the detail has been exaggerated, changed or even simply just plain fabricated, and the sites turn into a waste of time.

When I get given information like this I always do a bit of research to judge the plausibility of the story, and then go from there. If I can find evidence of the site’s use, it will confirm the story and eventually lead me to track the landowner down, and then get searching (assume I got permission that is!).

This site was different in that whilst the source was very trusted, I could find absolutely nothing during my research on its supposed use. I forgot about the site for a few months then was asked by my friend if I had managed to get out and check it out. I didn’t really want to let him down so I went out to the site expecting to find sod all. As this was my first visit, and I hadn’t yet located the landowner, (as I hadn’t even looked!), all I took with me was my walking boots.

I duly arrived and went to the spot identified by the friend of a friend, (still thinking it would be a wild goose chase). I looked across the field and could see nothing, so moved to the bottom where a small stream went into a pipe, under the field, and out the other side. There, in the bed of the stream, I could clearly make out three or four 2 inch mortar fins! I decided to go and find the landowner and went back to my car. When I got back to it, I found a battered old Land Rover right behind it and a guy looking in through the window. It was the landowner, come to see why there was a car parked in the middle of nowhere. We had a long chat about the site and he confirmed it was an old WW2 range. His dad had hated the army, he told me, as he had to ‘relay the bloody tarmac every three or four weeks as the tanks turning into the range ground it to dust’.

He also told me a story about three oak trees. These were in between two of the fields, one of which was still there as I had sat under it taking a breather. The landowner told me that a few years after the war had ended, they cut down one of the Oak trees and sold it to a local lumber mill. The mill owner was very pleased and asked if there were any more Oaks that they wanted to sell. ‘Sure! Two more’. They arranged to go back in a few days with another of the Oak trees. When they got back to the lumber mill the owner was really miffed. They offered him the other Oak to which he replied ‘You can bugger off with that bloody thing!! The first one you brought me I broke three saw blades on all the bullets in the damn trunk!!’.

With that evidence, and the fins I had seen, this could be an unrecorded range and probably never ever searched before!

With permission granted I returned a week later. I had planned on detecting for around six hours, but had to give up after two. I simply couldn’t carry any more and I had been back to the car to unload twice already!!

I researched the site extensively but have never once found anything but passing references to its existence. There is absolutely no record of this range ever existing, yet given the volume of finds recovered, it was used very extensively.

On my first couple of visits I plotted my finds to give me an idea of how the range was set up. I found specific areas used as a small arms range, ones for grenade practice, ones for 2 inch mortars, and even an area full of PIAT bits. It is an incredible site and, even though I’ve not been back to it for a couple of years now, is one of my favourites. The reason I’ve not been back? I always say you can never have enough WW2 relics, but even I got fed up of 2 inch fins, No 151 fuzes and 2 inch safety caps. Plus I couldn’t fit any more on the shelves I have devoted to this site in my collection!

A quick word on safety. Mortars and PIATs are not to be messed with. The fuzes on both are very sensitive and once fired, the firing pin is placed in line with the exploder to detonate the high explosive. With both types of ordnance, once fired, the fuze safety devices are no longer in place, so never ever move a mortar round or PIAT bomb. Digging at this site is very limited as I don’t want to run the risk of hitting anything sensitive, so I NEVER dig at the target end of the range, only recover surface finds. If I am digging at the firing end of the range, I never dig any large signals, in case they are mortar or PIAT rounds. I know this is commonsense, but it has to be said. DON’T MESS WITH MORTARS or PIATS!

Onto the finds. The first pics show group shots of one day’s digging EACH. One pic = one visit. It will give you a good idea of the volume of stuff that is there! (the two pics with finds on a white tray were when I was searching new areas trying to map out the range…..hence why there were much fewer finds……I avoided the best areas!) 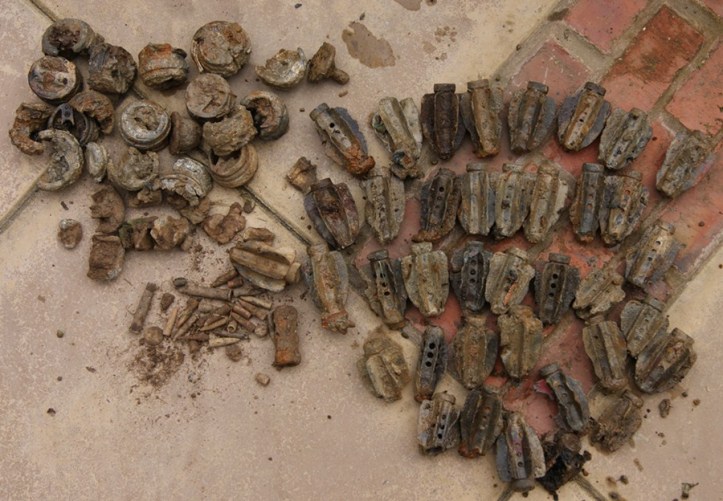 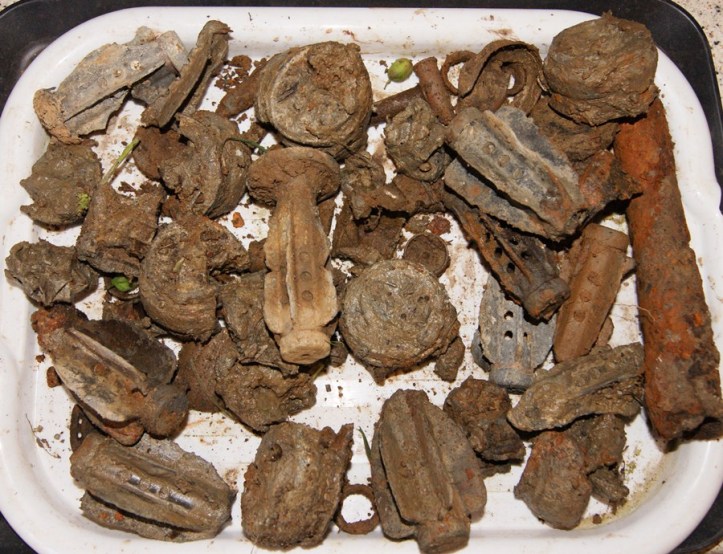 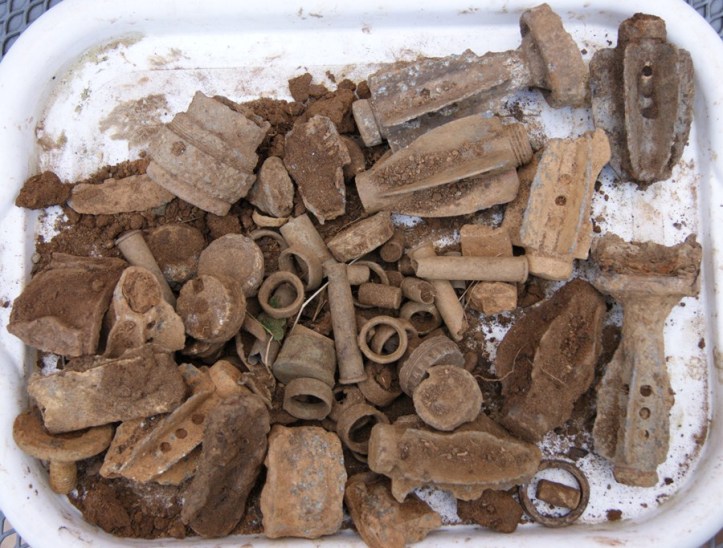 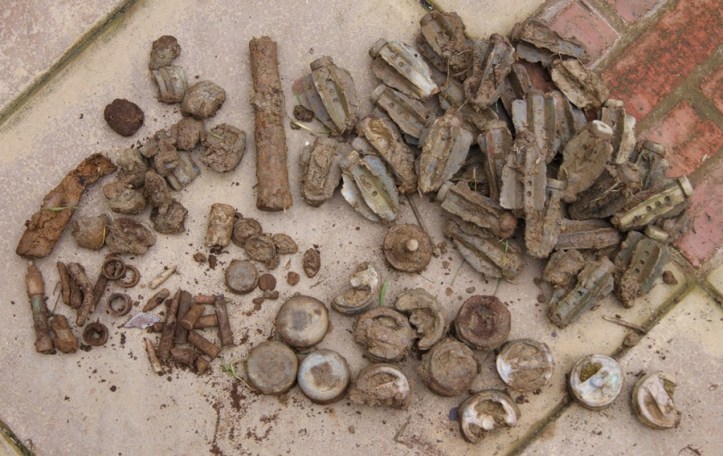 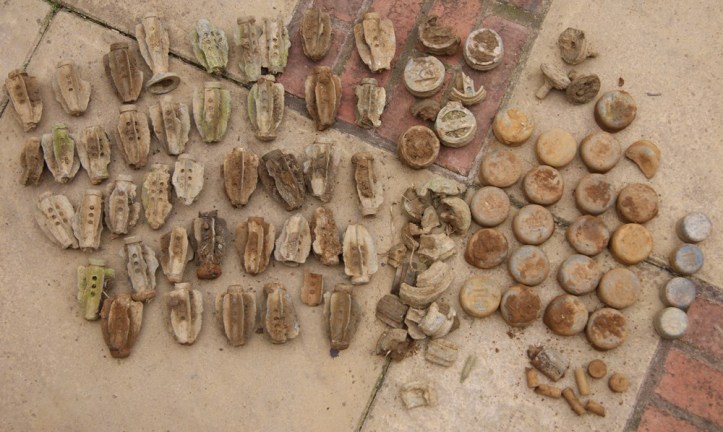 As you can see, it is one heck of a site.

Just goes to show that not all the stories you hear should be ignored. Sometimes, little gems like this turn up.